Below is the breakdown of the design of the map bt_Glacier, a booty style game mode, which is basically a dynamic "Capture the Flag" map. Players must capture and defend chests in their bases until one team's score reaches zero.

Glacier was originally a contest-winning design by the user Parrot of War but was put on hiatus until I took over and redesigned the map due to several design issues that plagued development. I've also done about 90% of the texture and 3D prop work, as well as the level building inside Hammer. Additional help was supplied by other team members that included art assets, design decisions, and playtesting. I've also created an in-depth video on the design and history of Glacier which can be found below.

Final in-game screenshots are shown below

- The main goal of Glacier was to be a much faster-paced booty map that includes new gameplay elements that aren't found in other booty style maps. We achieved this design in several ways by creating a dangerous focal point that is attractive to players through different playstyles, shorting all route to route times, and including new level-specific mechanics, frozen water, and frozen ice chests. These also had the bonus of matching the theme of the map being set in the frozen north.

Glacier is also a map that is mostly designed by playtesting, with a core focal point in mind, we designed around this single area until the gameplay started to match the philosophy.

Below you can see a final design overview of the map that's playable on live servers. 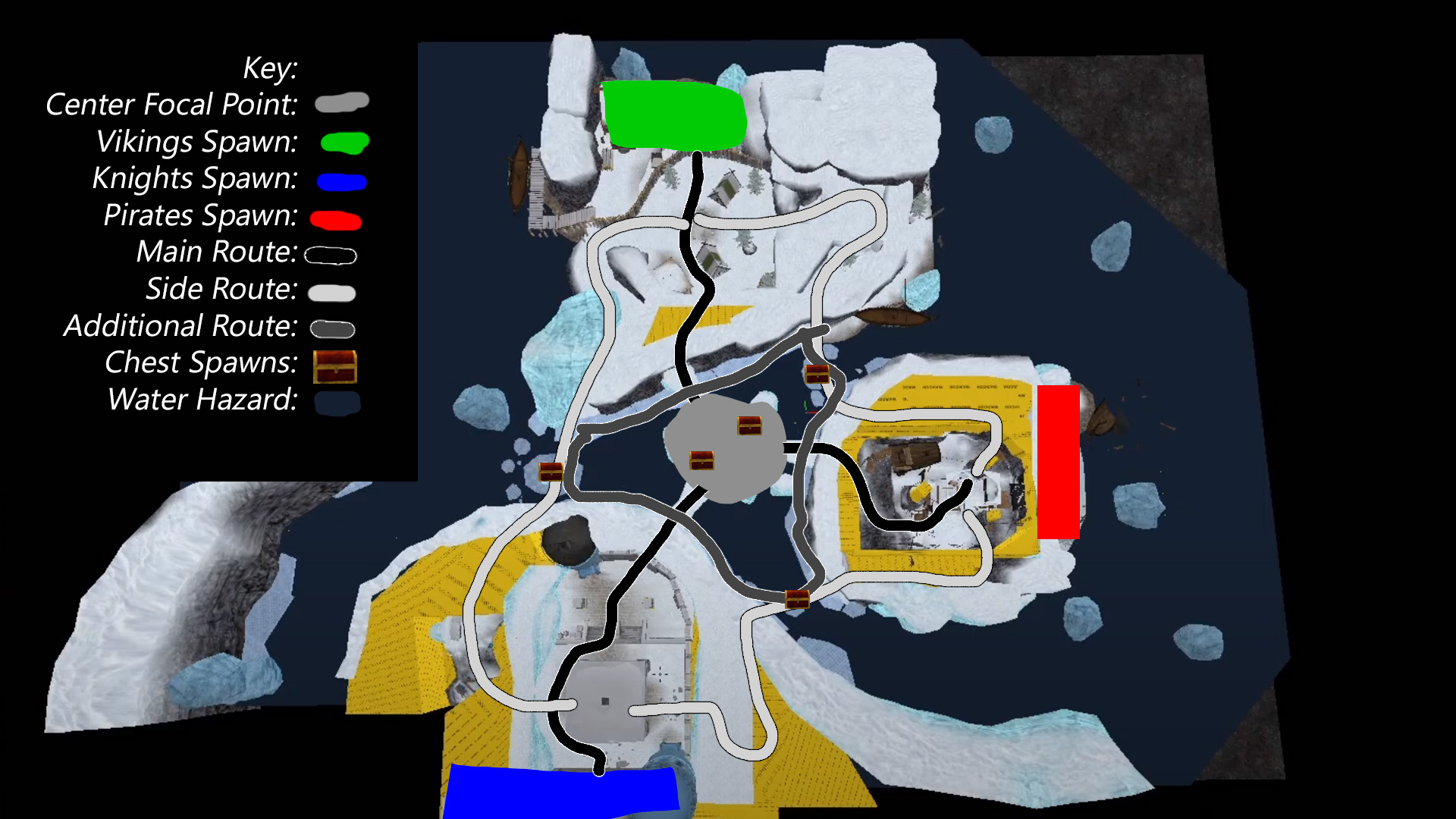 - A 3 Base design that matches each faction thematically with no specific faction strength. This creates high tension gameplay that doesn't allow for teams to easily defend their chests.

- Frozen water that damages players health directly, but allows for enough time to travel through from one side to the other without dying.

- Chests are frozen in ice that players must break out. Rather than use a timer before chests are active, the breakable ice takes that role instead.

- A dangerous focal point that players can be kicked off by other players into the dangerously cold water. Players can swim out of the water usually before dying, but if a player has low health and they fall into the water, they're as good as gone.

- Low and odd number (5) chest design. A lower amount of chests means higher value for each one making each one count and with chests easily taken, the fight for them is constant.

- Shorter routes to each base, decreasing the downtime to gameplay and creating a game where even if a team is low, they can still lose due to the lower defenses of each base meaning each game isn't over until it's over.

The history of Glacier, as well as a discussion about Glaciers design, can be watched from the video below