Welcome to the Neighborhood!

Below is the whiteboard sketch that kicked off this project.

After School Special was the original concept name, but eventually the school was redesigned as a military base to help with the zombie outbreak and so the name Bad Neighborhood was used. The design also included 4 new survivors to match the story, but we're never completed or implemented.

Below you will see more in-depth design break downs and reasonings behind my original designs. I also included a post-mortem section where you can see what I believe worked well and what could use revision. The images shown are from inside Hammer directly, or from the compiled version with no baked lighting information. To see final in-game screenshots click back here to go to the showcase page - https://frankrell.artstation.com/projects/2xz8Dy 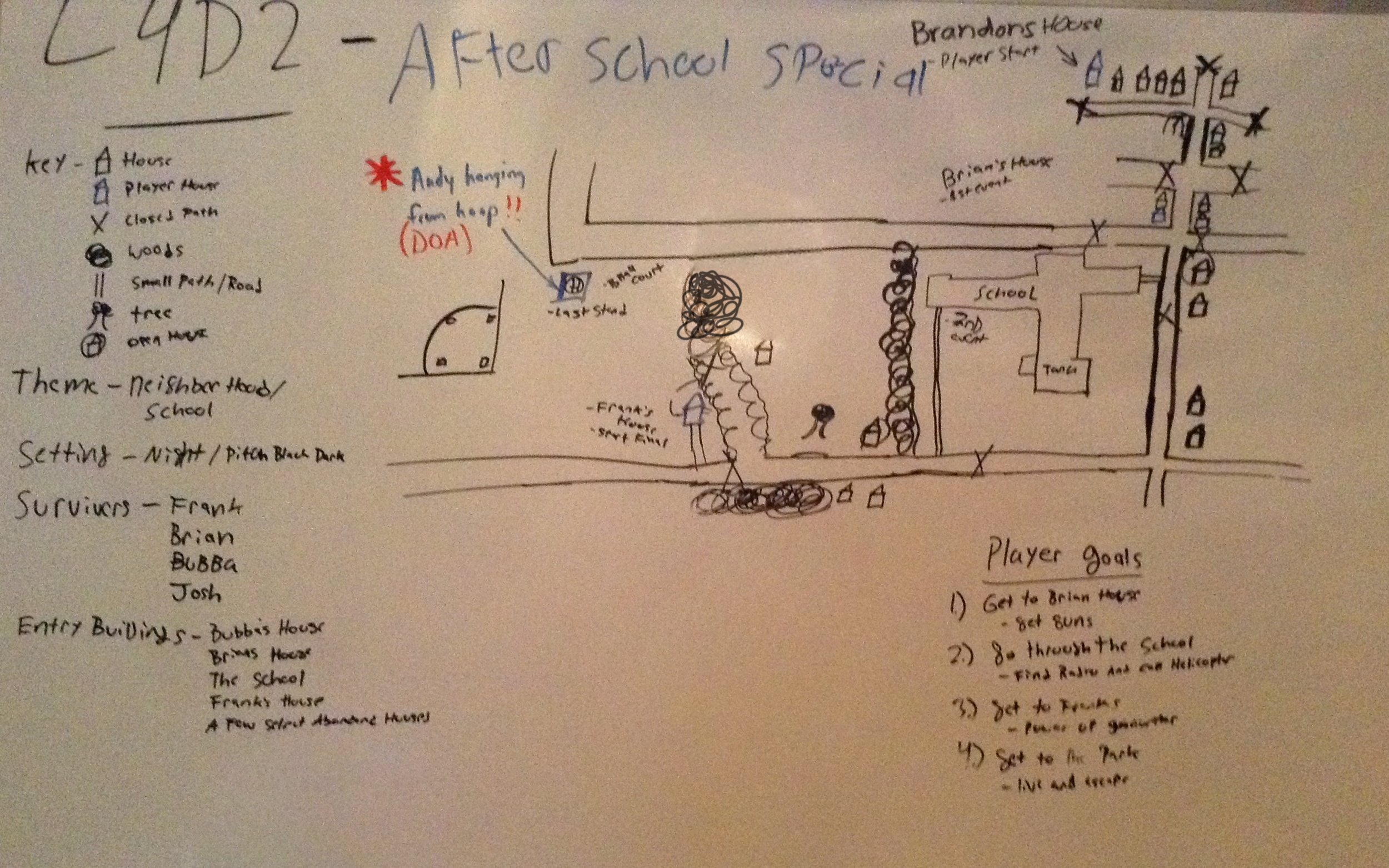 The first level is The Streets. This level's aesthetic and the theme is mostly a suburban neighborhood that's been ravished by the zombie invasion. The players are trapped in the garage of one of the neighboring houses but must make a break for it to a better safe house location in order to survive. The supplies they have are simple low tier weapons and items and have to make use of what they have.

- Environmental storytelling present at each house

- The initial horde kick-off is a unique starting approach, rather than the slower starting levels Left 4 Dead 2 maps usually include.

- Less linear feeling, although small, let's players run through back yards their way.

- Low tier weaponry, the survivors don't have much, as they progress through the campaign their own loot will increase in power.

- The level is very flat, including more terrain imbalance, and slope would add verticality which could allow for additional routes on rooftops for players to explore.

- The initial kick-off event isn't explained well to players causing players to be potentially confused as the level starts.

- The level could use a couple more streets and more open houses, as a lot are closed tight and the level can be quickly run through in little time.

- The horde event is due to a technical director issue spawning zombies incorrectly due to the very wide open spaces, while it works, it's design was put in place as a fix for a deeper issue that is still present. 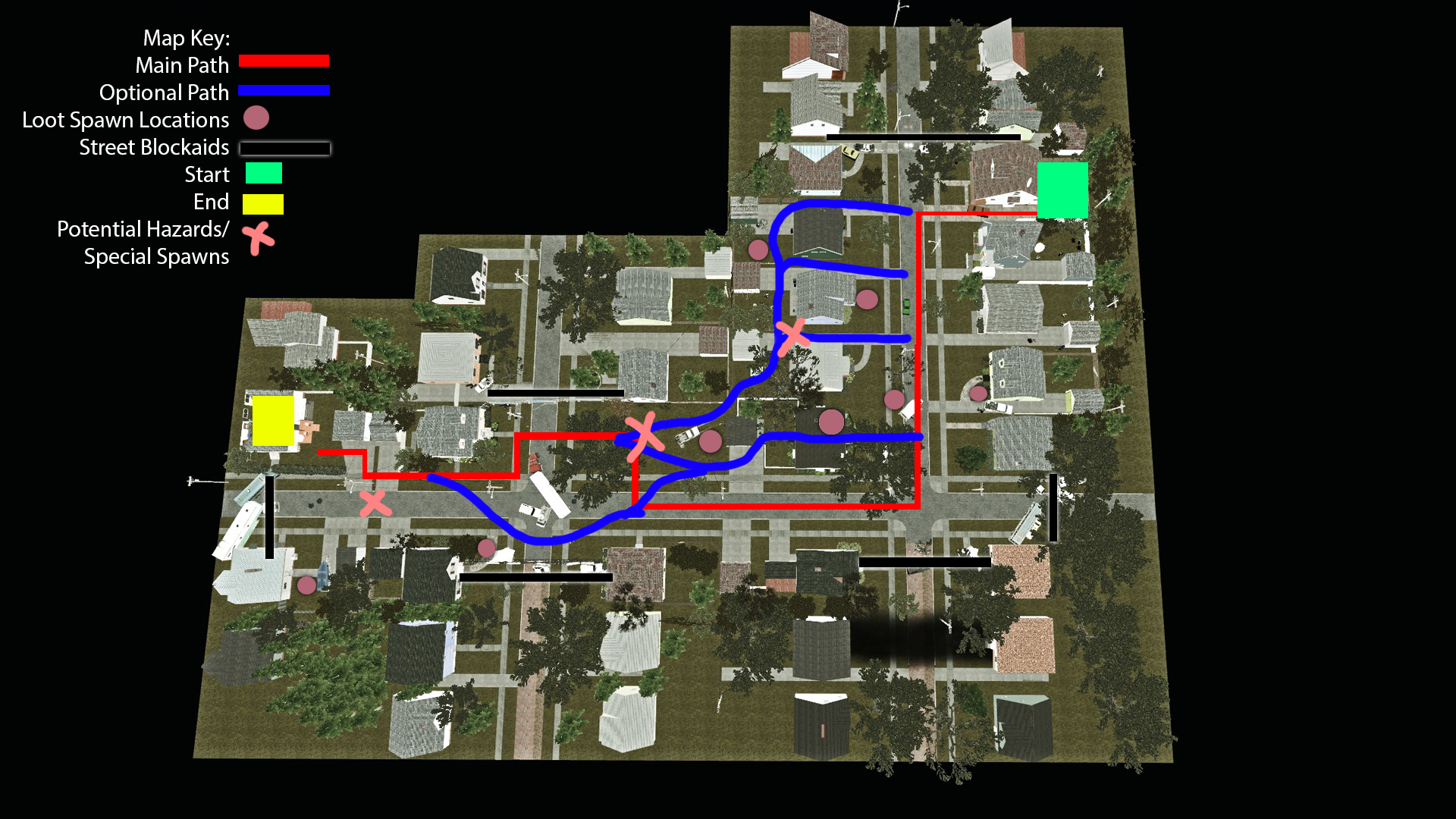 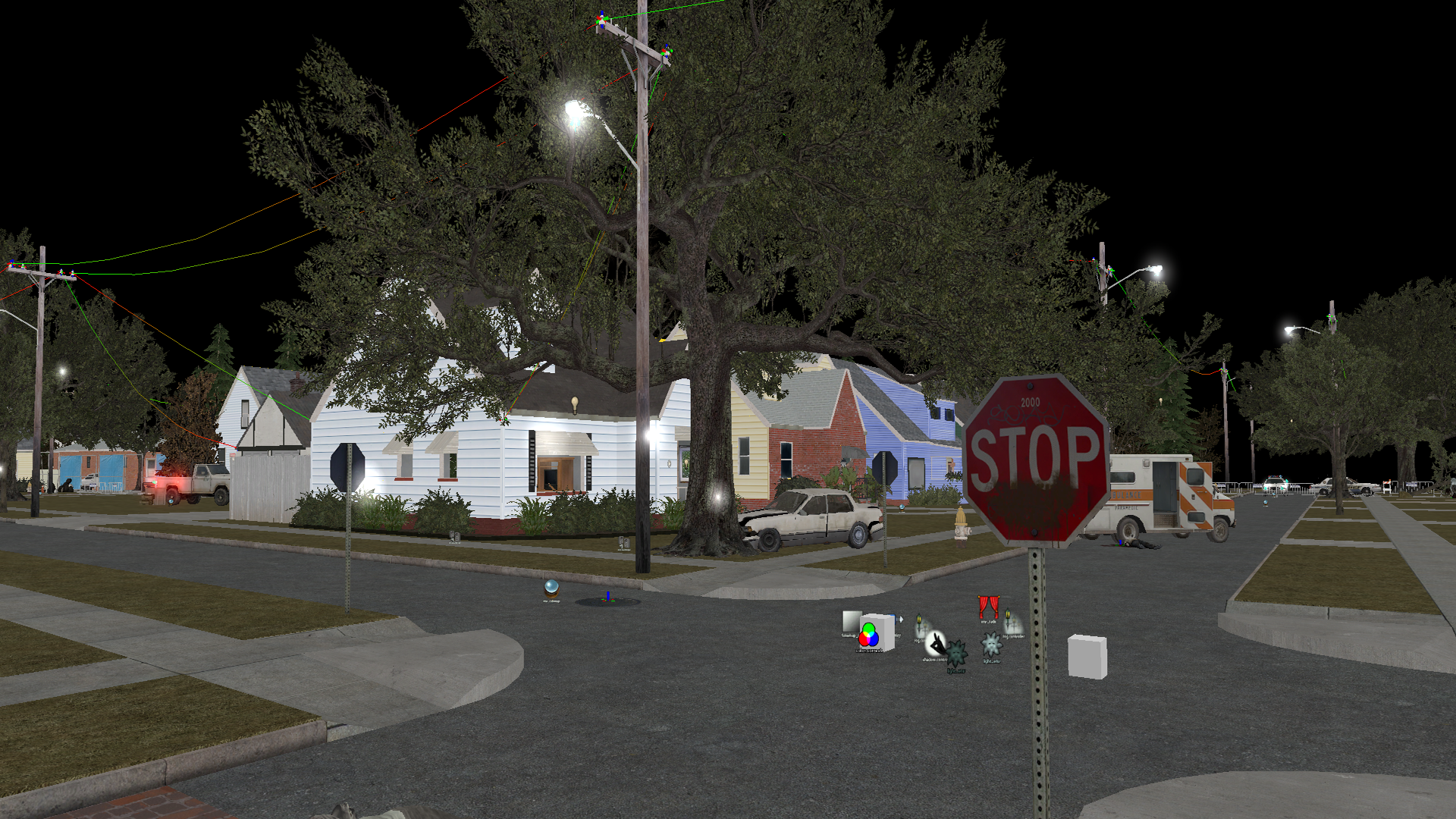 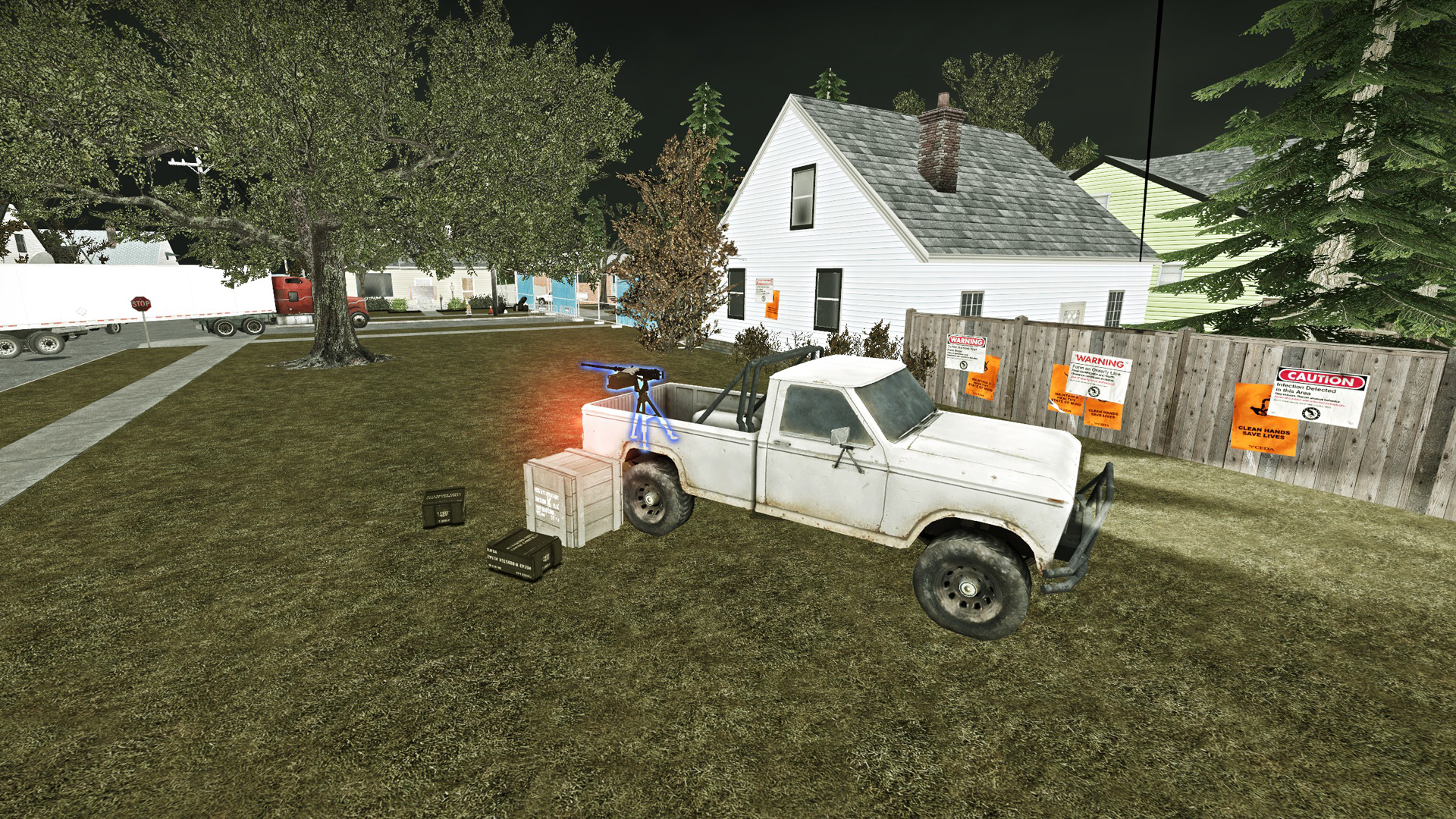 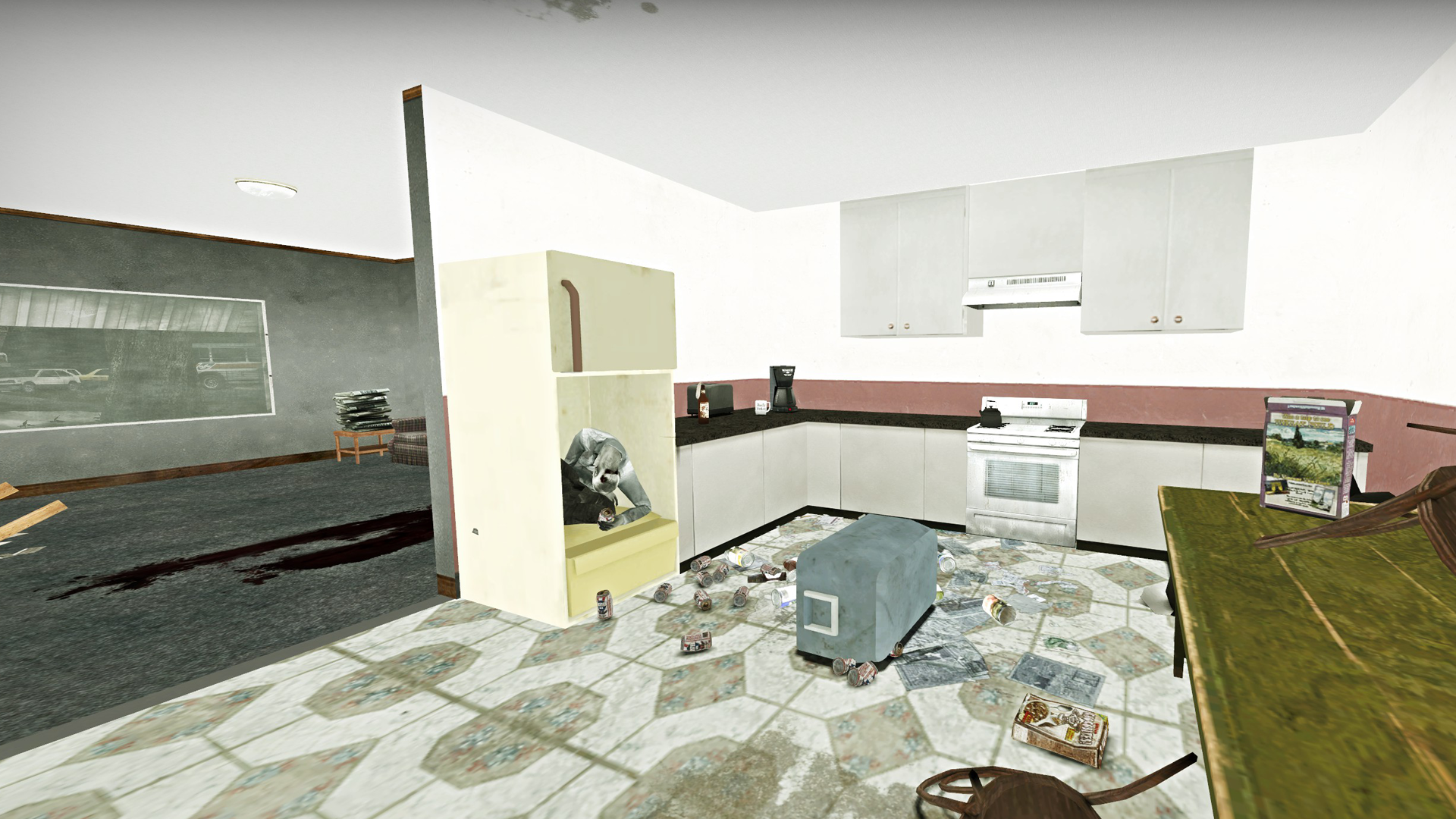 The second level is The School. This level's aesthetic and the theme is a continuation of the previous street level, showing off suburban houses in the distance, but the main focus is a school building that has been taken over by the military as a bunker to help those escaping the zombie horde invasion. This proved to be a failure as the building and military were overrun but leaving many supplies left around for the players to use.

The players are now better equipped for survival due to the weaponry stored at this safe house. Rather than sitting and waiting as they did originally trapped in a garage, they decided to find a way into the fortified military school to find a way to call for help. In the school, the players will find a radio to call for help. The person on the other end gives them directions for a helicopter rescue attempt at a nearby park.

- Breaking into the school using explosives, the first horde event.

- A fight in the dark event forcing placers to use gun flashes as a light to fight zombies as they look for a way to disable the alarms.

- Using military equipment to destroy a car, opening a way past another barricade causing the second horde event.

- Verticality, allowing players to climb and fight on the roof of the school building.

- The first scripted Tank fight before the end.

- Storytelling through the use of a radio directing the players to their next location.

- The large-scaled school building feels like a great next level coming from running through and around small buildings in the previous level.

- Breaking into the school feels intense, it's difficult to see and there are a lot of attacking zombies making finding the lights and turning off the alarm a great moment of relief.

- The scale and length of the level feel right, which includes two horde events with well-paced action.

- Increase in power due to the military's strength left around.

- Attacking from the roof, even though a simple act, it's a good feeling to be able to pick zombies off from a safer place.

- Technical spawn room bugs, this isn't directly a design issue, but there are some technical issues due to the way the spawn rooms were created.

- Even though there are military props all around, there could be a more fortified feel, really pushing the narrative of the military's presence.

- Very linear and lack of options for the player to explore. Left 4 Dead 2 is a mostly linear experience, but even so, alternate paths are always welcome but are missing from this level, making replayability suffer from it.

- No respawn room, originally I didn't feel the map needed one, but due to the difficulty and length of this level, I feel it would be a great addition.

- Lack of direction. Although linear, the pathing for this level could feel better through the use of signs and environmental storytelling or closing and opening of certain walls and paths. 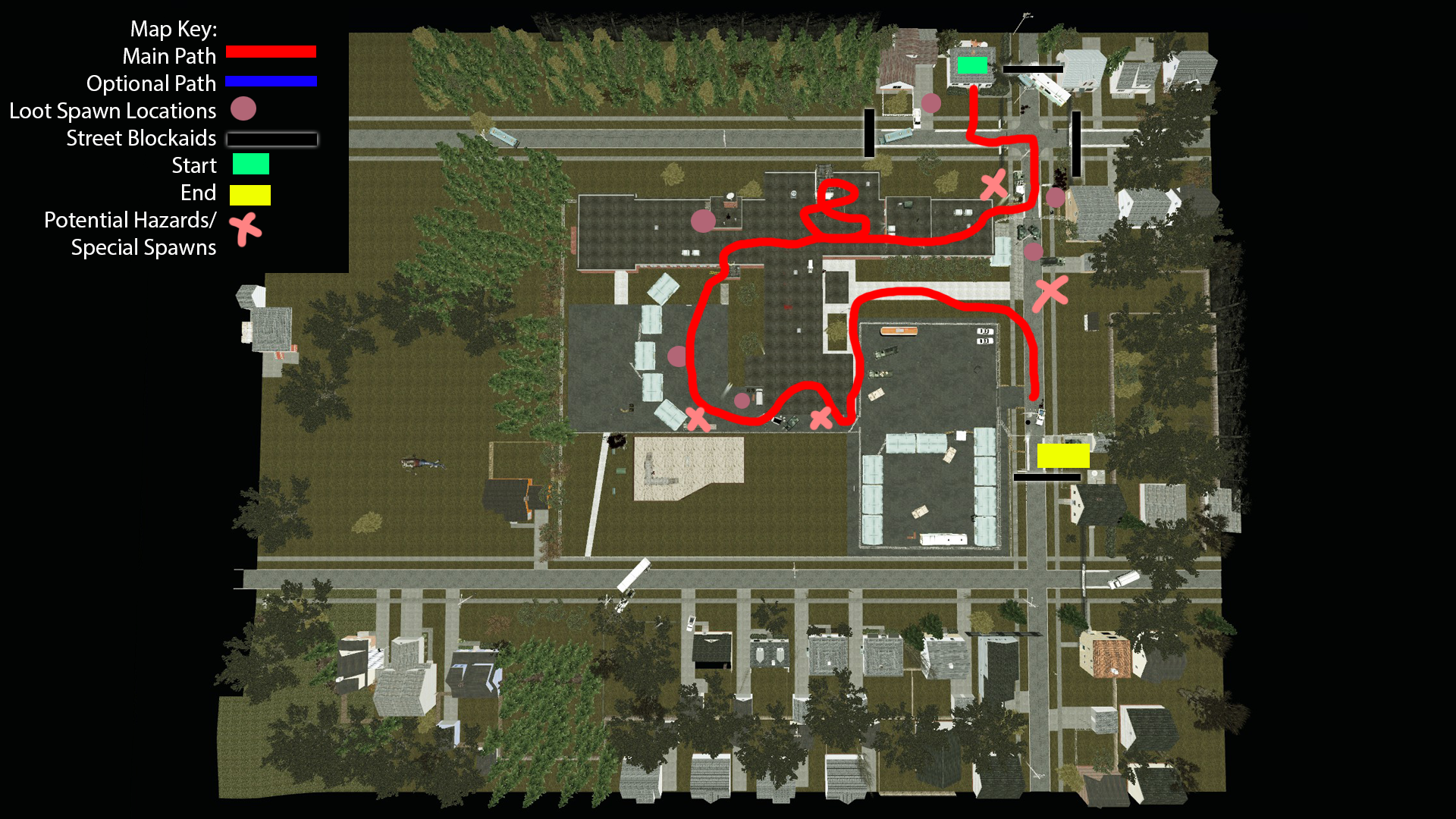 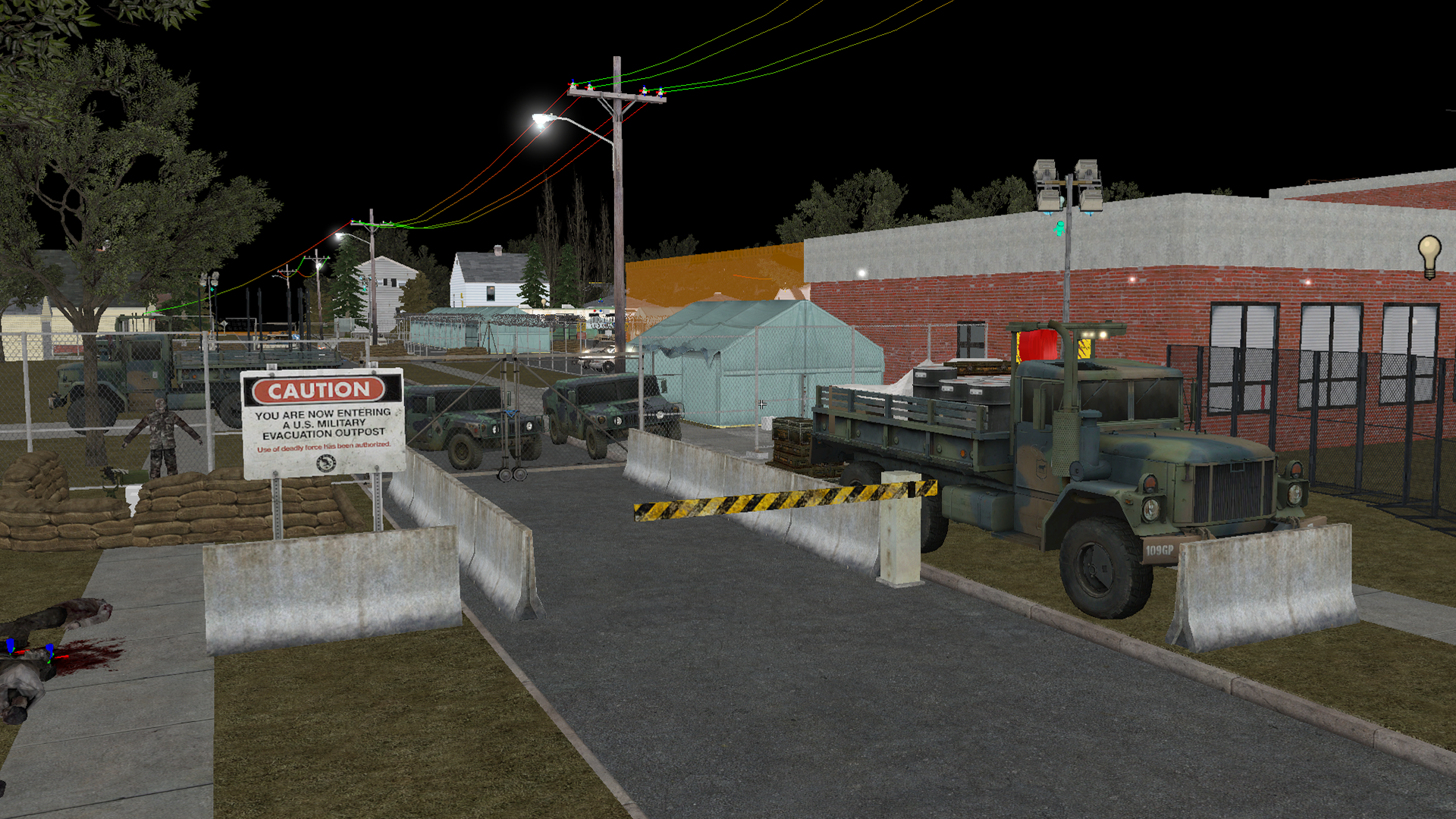 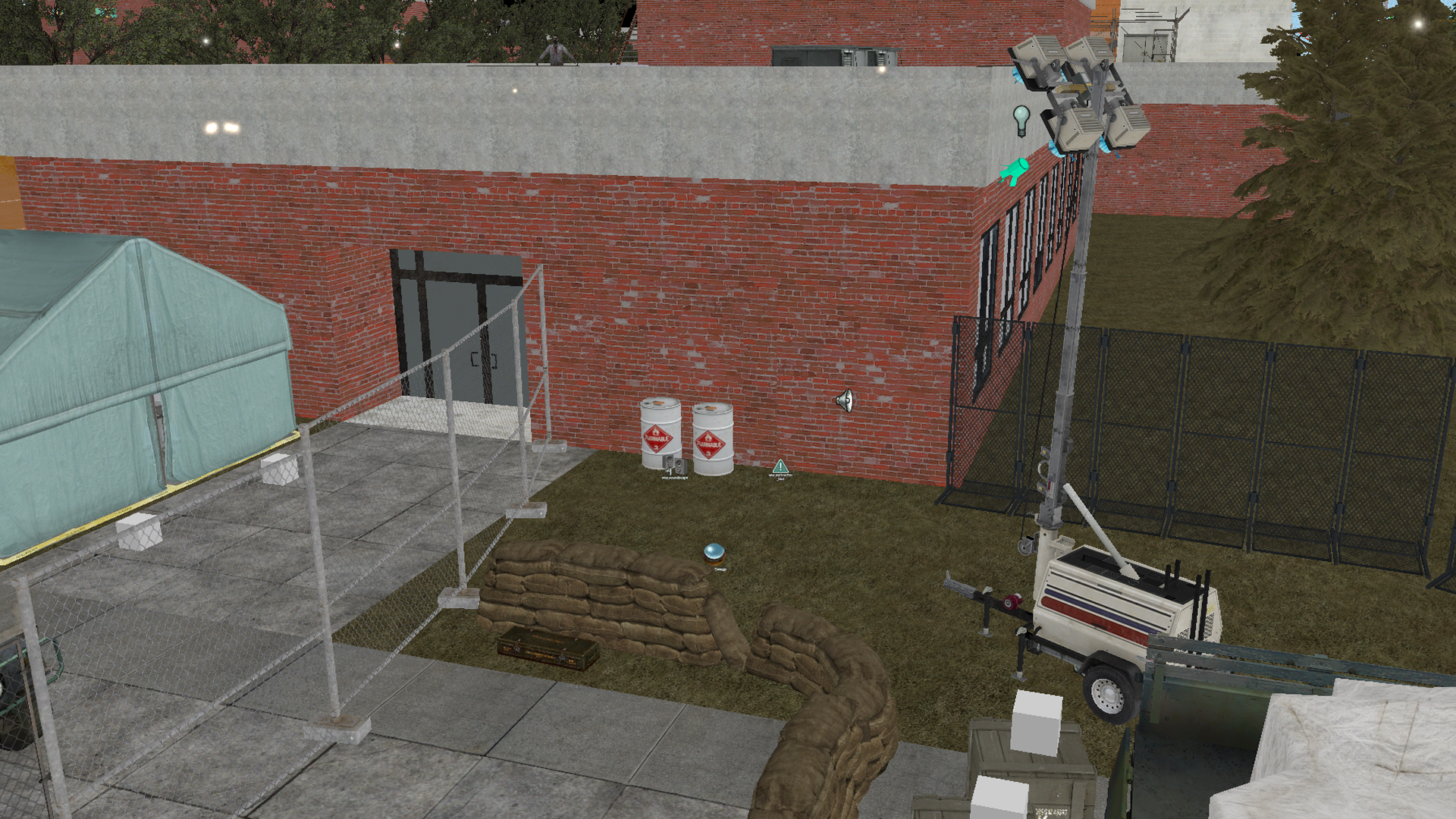 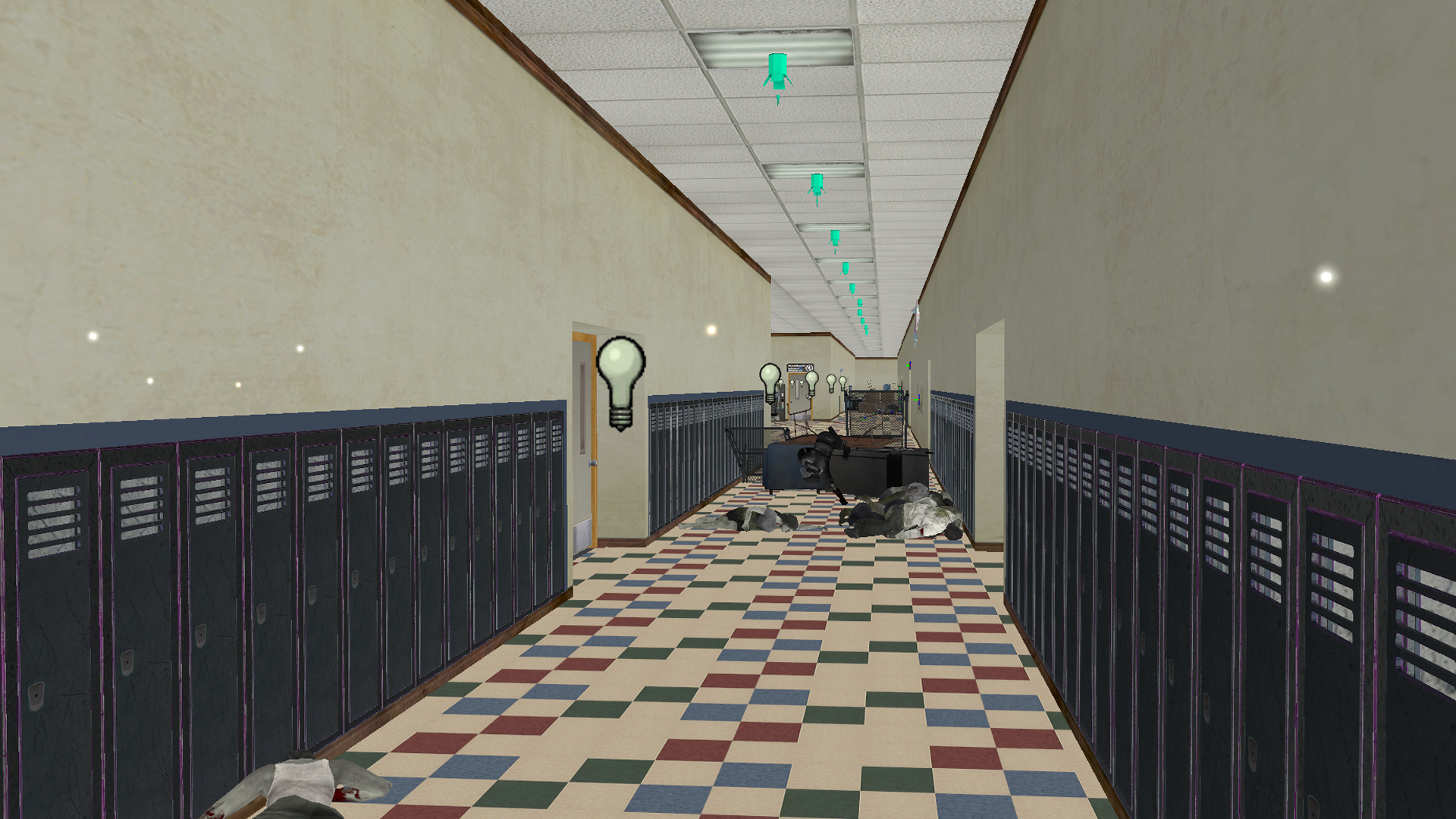 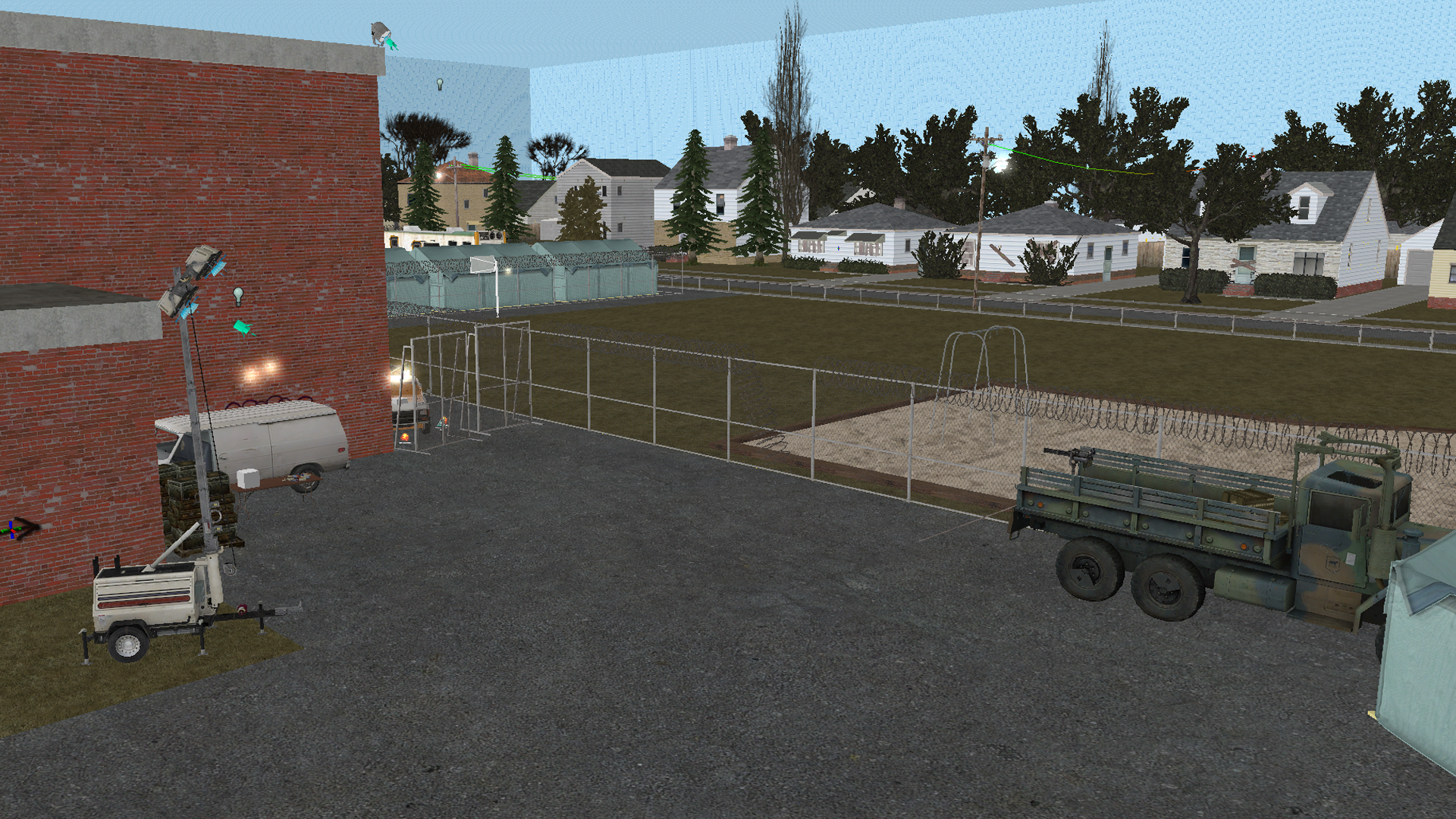 The third level is The Sewers. This level's aesthetic and the theme is an underground sewer with a control room that moves water through the city underneath the streets. Down in the sewers is where players travel to find themselves up against a tank and attacking horde in close quarters. Escaping the sewers will lead the players right at the evacuation location they learned about from the previous level.

With nowhere else to go with all the military blockades the players are forced to travel underground to get to their destination. In these sewers, the players will try to find an exit location that will lead them to the evacuation location. While walking through they are stopped by an elevator they must activate, calling all zombies nearby to their location they just fought the tank in. It's even possible to fight the tank and horde at the same time increasing the challenge for players. Once they escape, the safehouse is very close by.

- Battle with a tank in knee-high water.

- Fighting off a zombie horde while riding an elevator.

- Close quarter combat, in contrast to the previous levels of heavy open spaces, felt better to navigate, even though both are linear in design.

- Tank fight, the area was designed for this fight and is a really fun encounter.

- A more Interesting location, a break from the realism the other maps push really helps and shows maps should have a level of fantasy to push the game's design and narrative.

- After the players escape the horde via elevator, the space above has very little zombies for how long the stretch is. This is due to there being no space for zombies to spawn out of sight of the player.

- The horde event is very difficult, often requiring multiple attempts, this is by design, but when the player survives, they are often very low health, and the final stretch out of the sewers has little to no loot to help players.

- Needs twists and turns, the extremely straight level works at first to match the aesthetic but should have some splitting paths.

- Lack of storytelling. There are some notes at the start and spraypainted walls, but there aren't any more story elements for the players to discover. 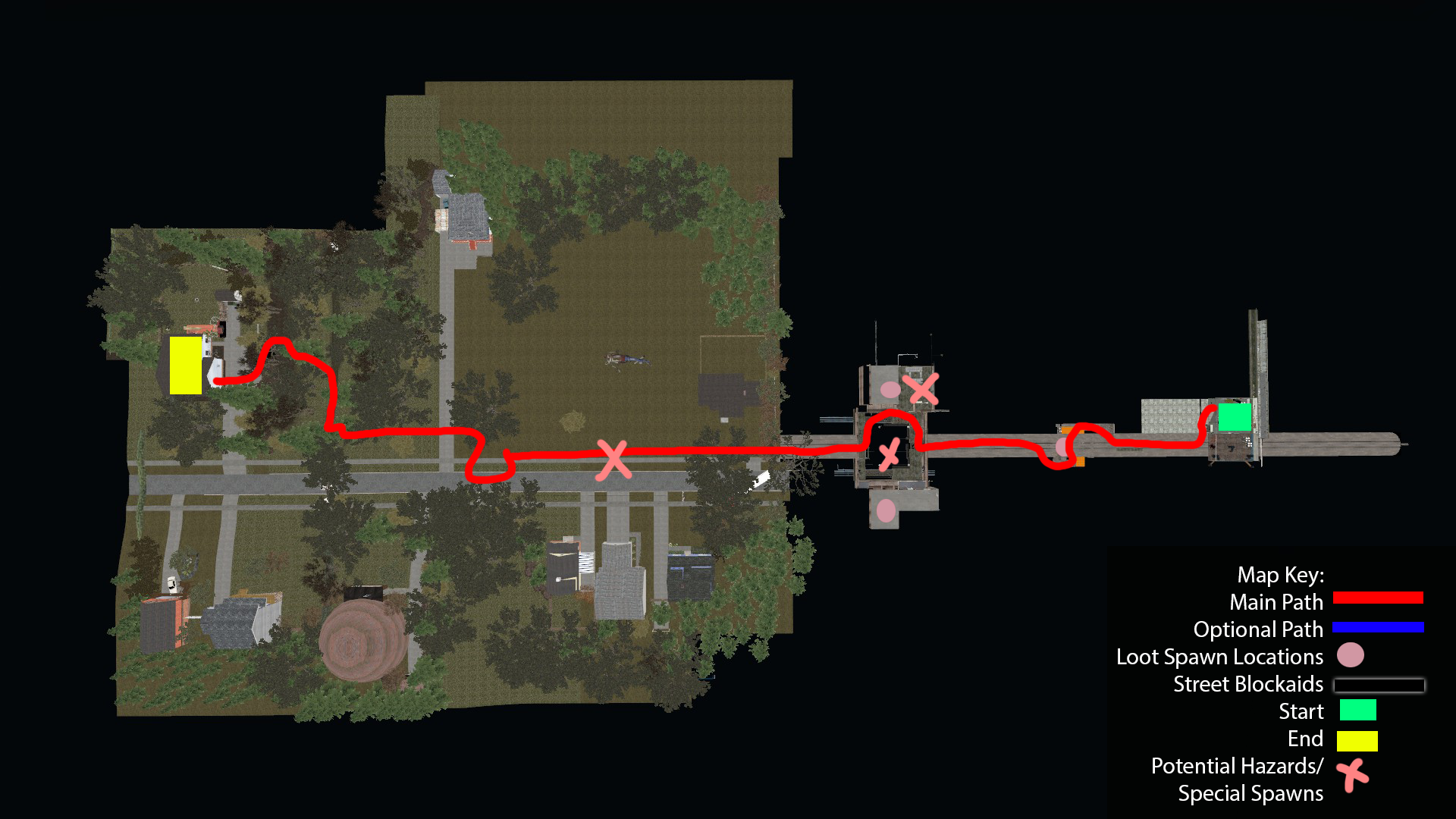 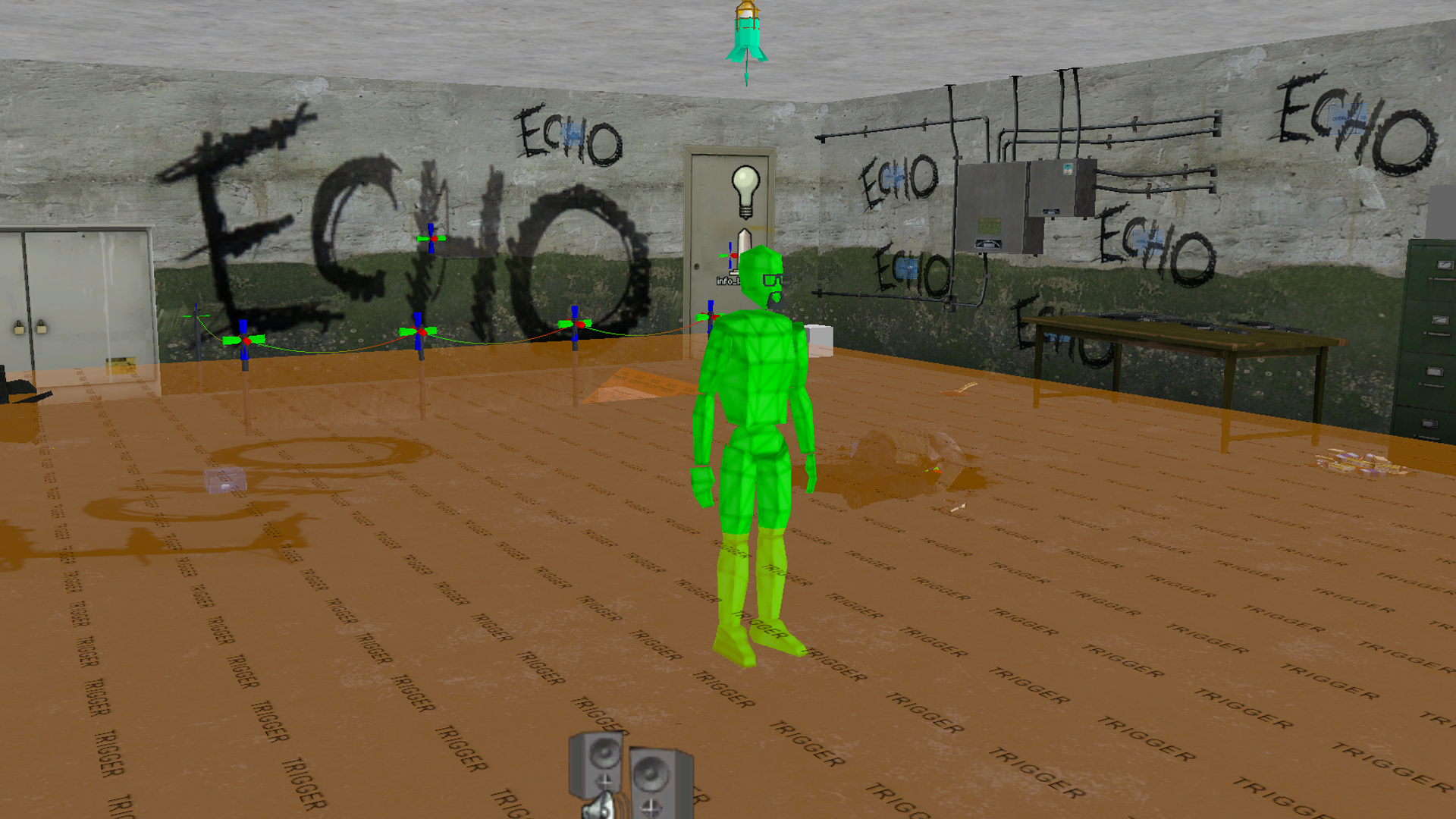 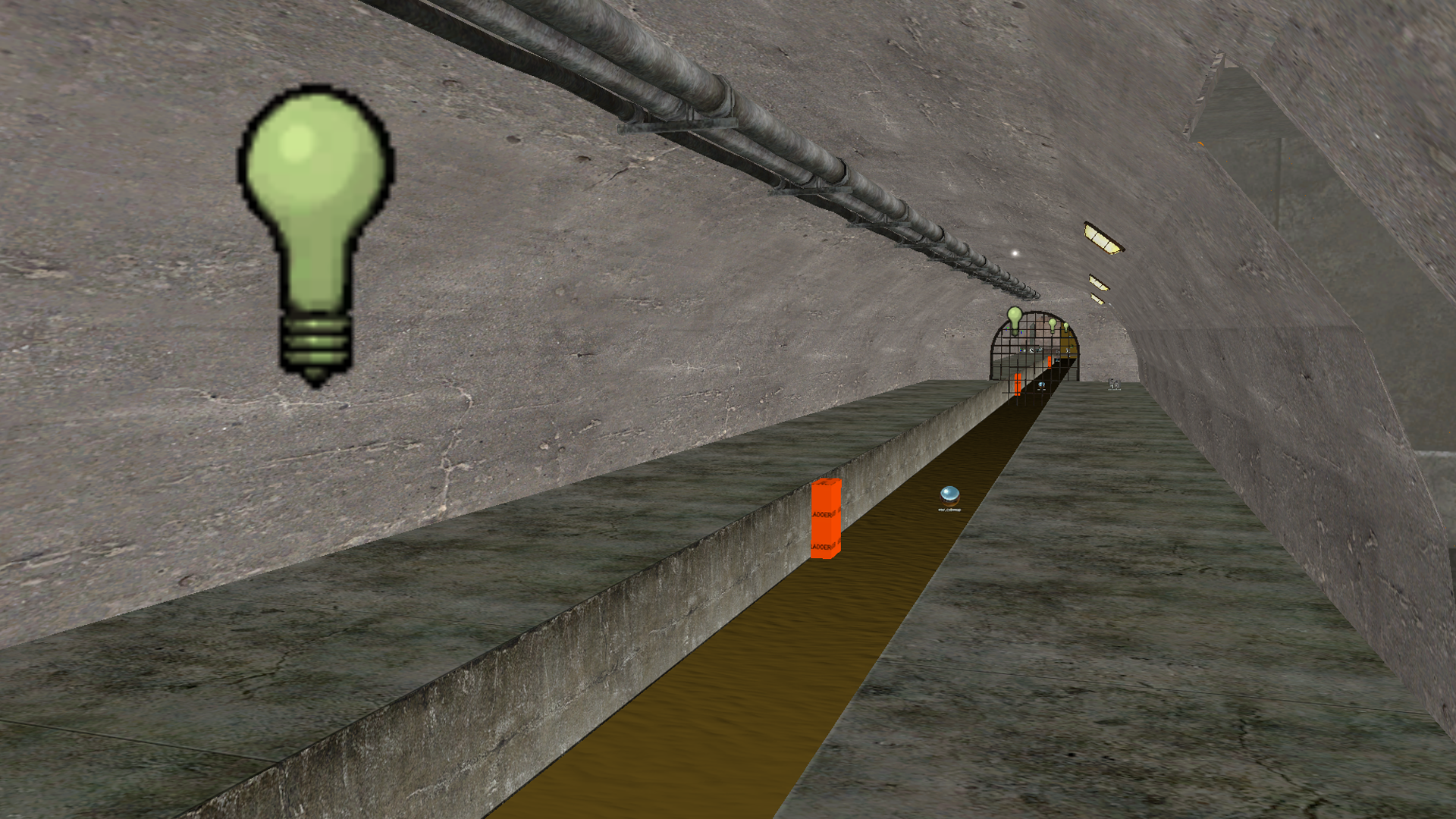 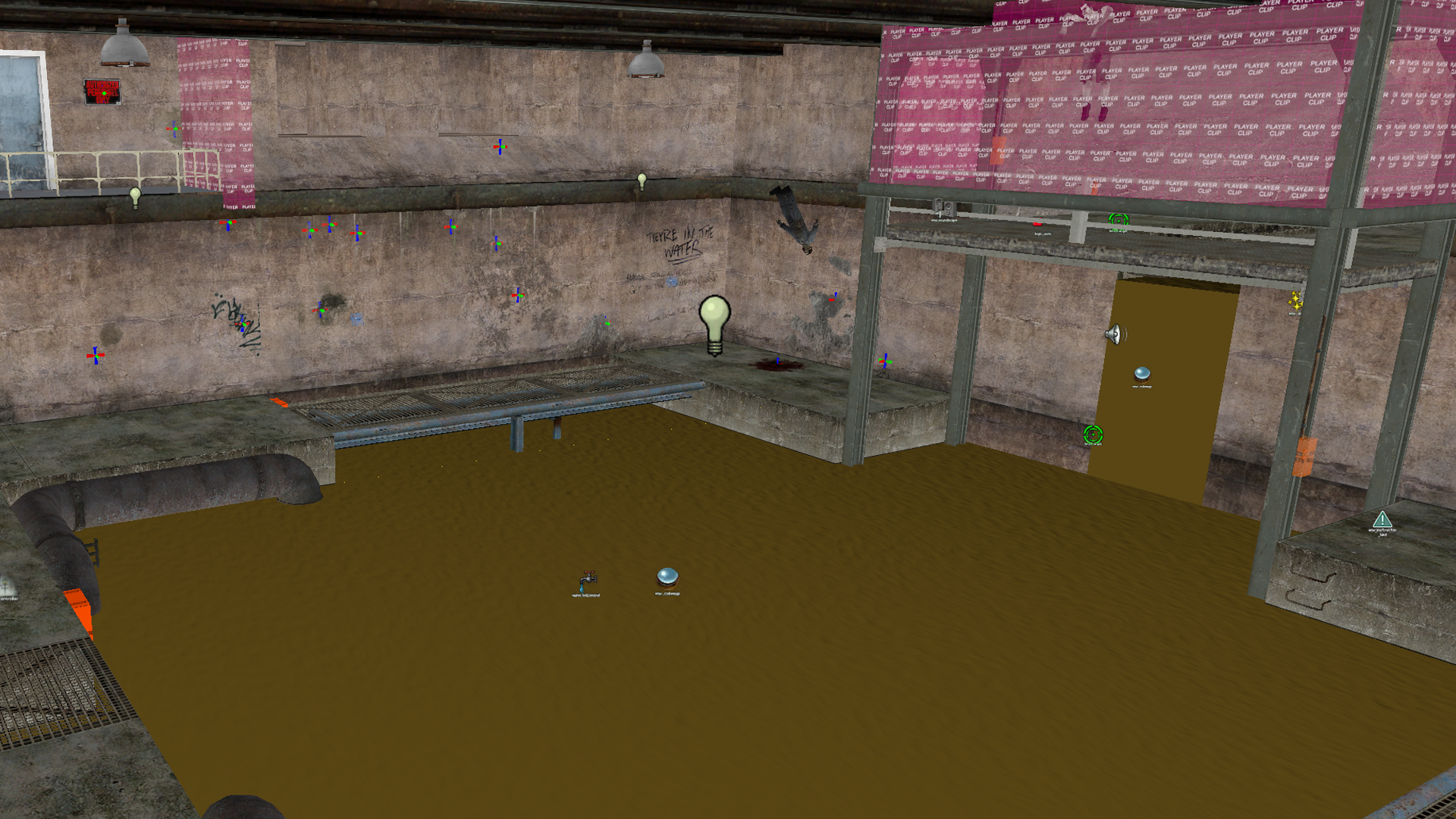 The fourth and final level is The Park. This level's aesthetic and the theme is an open park that has a baseball field, a playground, and a basketball court where the players will fight around while they wait for the evacuation helicopter they called for in level two.

When the players enter the park, they will be alerted to find a radio from a crashed military truck on the basketball court that will trigger the finale. The players will have access to run around the full open park area to fight the zombies that will attack from all sides. This finale has a custom scripted event to deal with how open the level is. If players survive long enough, they must get into the helicopter that arrives to complete the campaign.

- Open map design, allowing players to fight anywhere they want in the park

- Open map is very unique compared to most finales in Left 4 Dead 2, although I believe it worked with a custom finale, it does have it's drawbacks being as open as it is allowing players to kite zombies fairly easily.

- Custom Scripting allowed for two tanks to fight at once, in a close quarter fight, this would be unreasonable, but in a great open space, it created a fun encounter.

- Somethings are out of my hand with this level of openness in the game's design, but I think this level could be improved by turning the finale into a turning point to starting a new level or even the start of a second campaign. So the zombies or tanks the players are fighting as the helicopter arrives to turn on the helicopter causing it to crash, forcing the players to escape another way through a chase sequence. This will allow more use out of the large open space and lead to a continuation of the story. 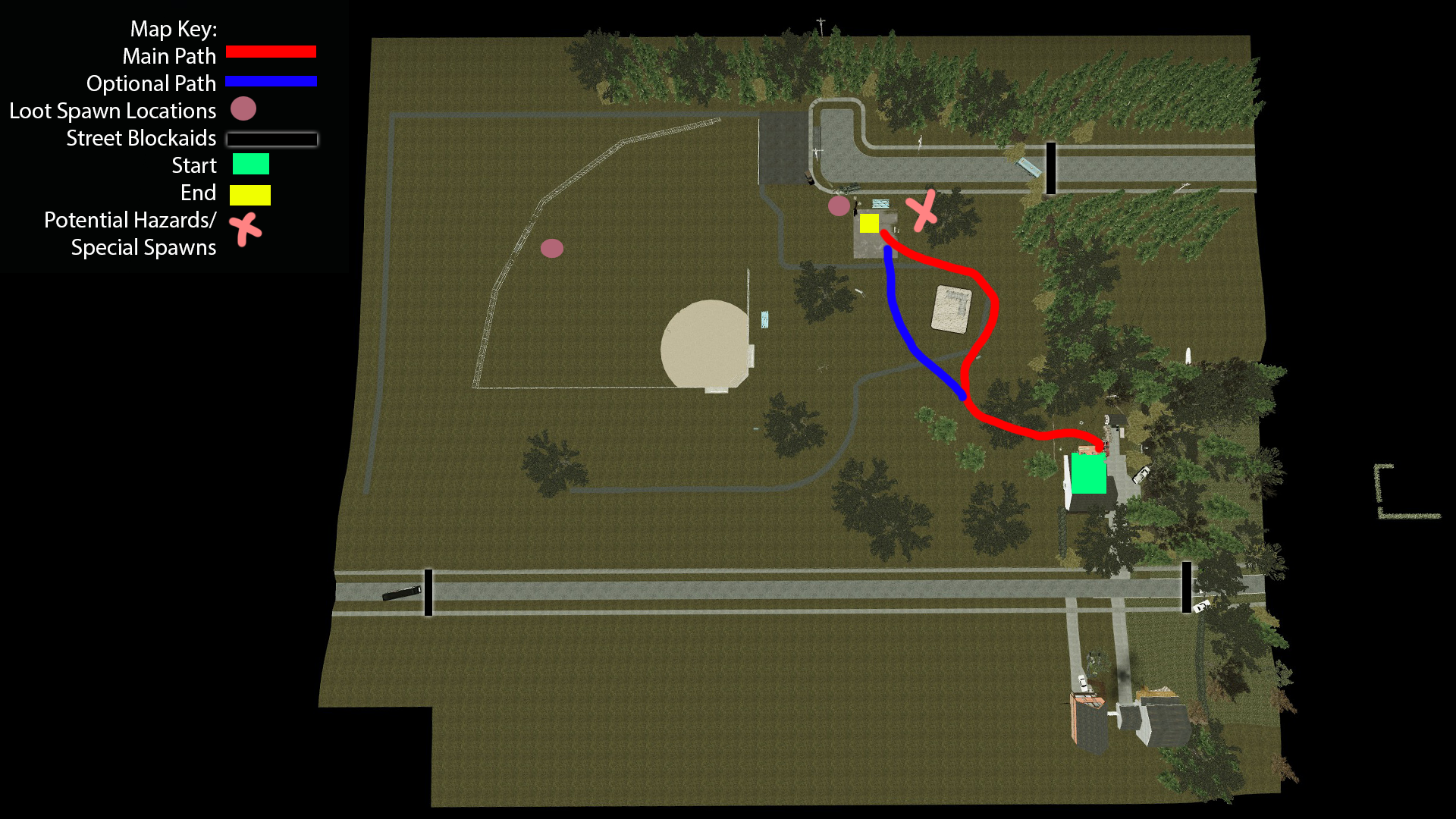 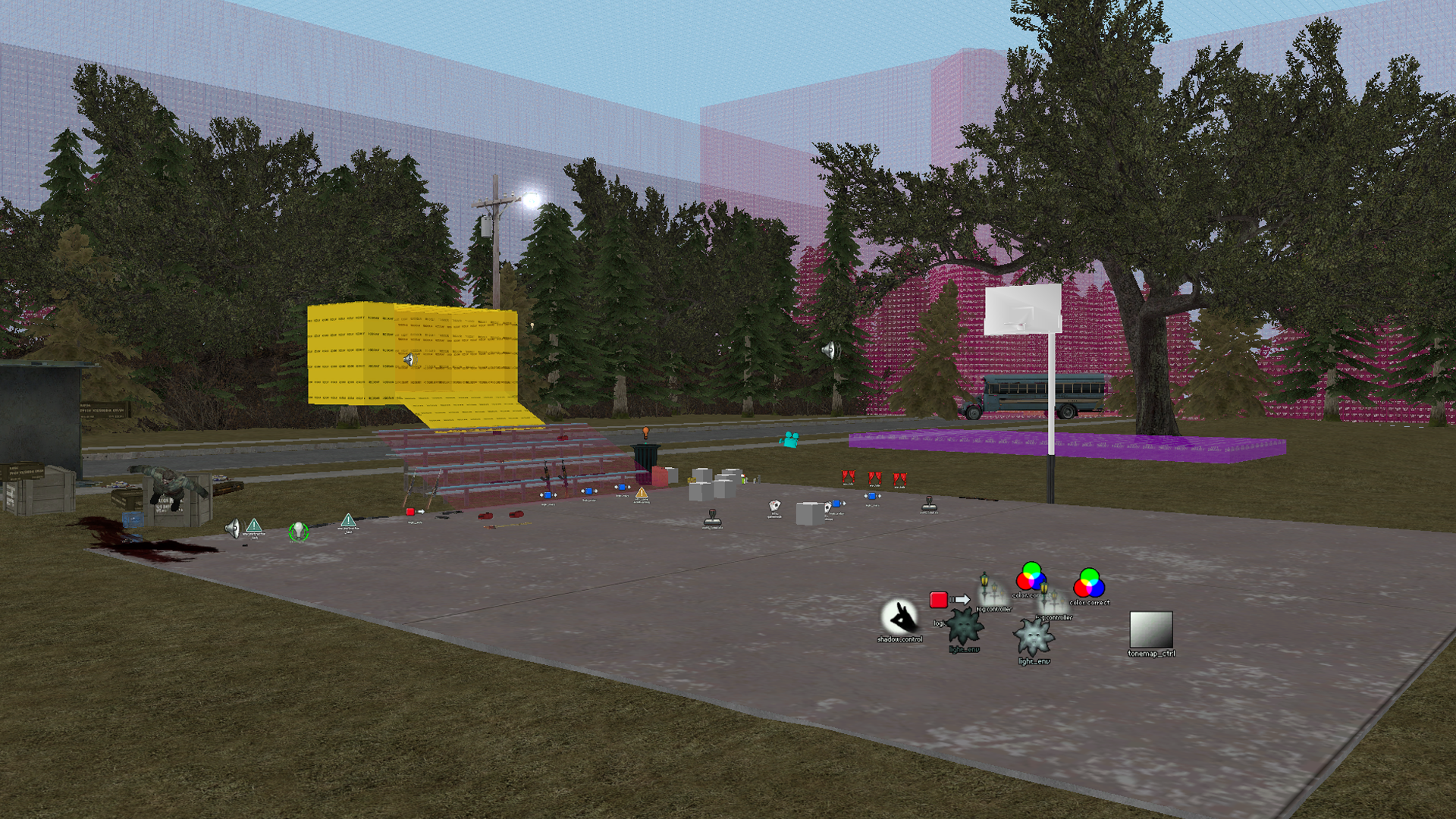 Below are 10 videos showing the process of design and development of Bad Neighborhood.